OpenShift vs Kubernetes: Helping You with a Choice 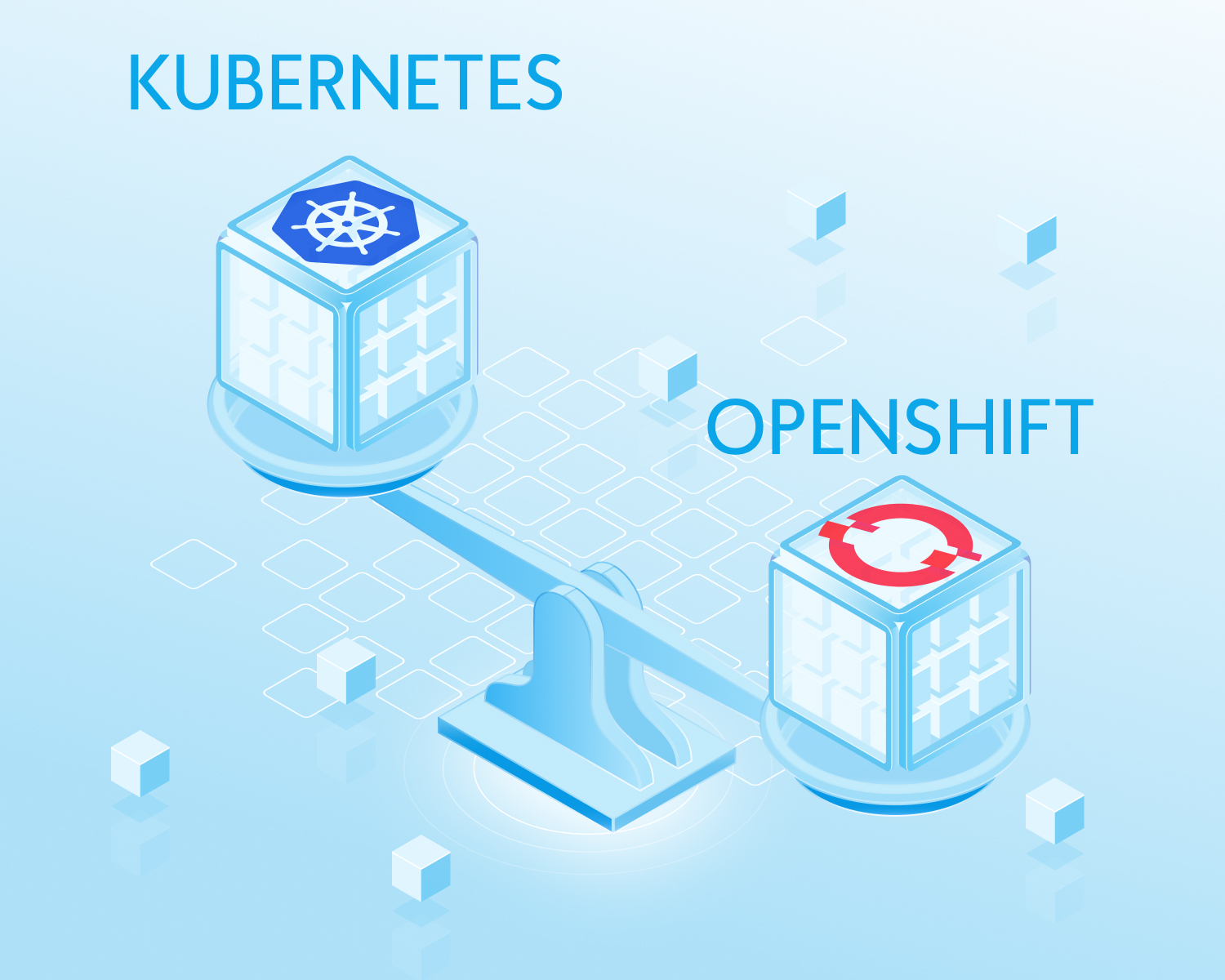 The IT-driven business environment of the early third millennium is an extremely competitive one. Both wholesale and retail enterprises across multiple industries go to all lengths to reach out to a greater consumer audience and outsell their rivals. High-quality products, lively email marketing, and aggressive advertising are essential features of big-time success in the field, but winning over customers can’t be accomplished without leveraging proper digital instruments, among which all sorts of desktop, web, and mobile apps carry the day.

Even if your organization has an app, it should stand out among competitors—and not only due to its attractive design or smooth UX. It should be Agile and scalable to grow and transform with the company’s shifting needs. With this goal in view, quality-focused app developers employ major common techniques. They equip apps with cloud-native architecture or go serverless. Another trend streamlining the creation of robust apps is containerization.

This technology consists of bundling application code into a single event (aka unit or pod) together with libraries and other essentials. This clustered architecture allows software engineers not only to develop and manage apps better but also to improve their deployment and functioning as well as step up their performance. So it’s no wonder that two years ago, 46% of organizations prioritized this approach in their development efforts.

To make the most of containerization, you should leverage the proper technologies to implement it. And this is when the Kubernetes vs OpenShift dilemma comes to the forefront. But before analyzing the differences between OpenShift and Kubernetes to help you with the final choice, let’s find out more about each software product.

Launched by Google almost a decade ago, Kubernetes (or K8s for short) is an open-source and portable system that is probably the brightest example of Containers-as-a-Service (CaaS) software. It’s an excellent tool for developers to manage workloads and services by automating application scaling, deployment and operations, container balancing, storage orchestration, self-monitoring, and more. Keeping abreast of the current trends in the IT industry, Kubernetes joined the Cloud Native Computing Foundation, thus gaining support, oversight, and direction for its projects.

What are the main features of Kubernetes:

Seems a pretty solid roster to beat, isn’t it? Well, let’s have a look at what OpenShift vs Kubernetes has to offer.

This Red Hat product is a more comprehensive system previously known as Origin. It serves both as a containerization tool partly built on Docker and a cloud-based Platform-as-a-Service (PaaS) solution. OpenShift runs on Linux and supports a range of the most widely-used programming languages, such as Java, Python, PHP, Ruby, Perl, and Node.js, to mention a few. It also allows self-service provisioning and plays well with a whole gamut of tools to develop, test, deploy, and scale apps in the cloud.

In fact, the opposition of Red Hat OpenShift vs Kubernetes is somewhat far-fetched since OpenShift is not only compatible with K8s but is, in fact, fueled by it as a container orchestration engine. As Red Hat admits, Kubernetes vs OpenShift correlates as the kernel of distributed systems vs the distribution itself.

The most prominent capabilities of OpenShift include:

Differences Between OpenShift and Kubernetes Exposed

There are several characteristics along which we can compare Kubernetes vs OpenShift.

Here, the difference between Kubernetes and OpenShift boils down to the opposition between pure containerization and enterprise use. K8s is a free and self-supported tool managed via collaboration across the user community. Peer expertise helps to troubleshoot issues and receive valuable advice in case bugs crop up.

By contrast, the OpenShift Container Platform isn’t that open, in fact. It’s an enterprise-level commercial solution administered by Red Hat Inc. There is a free-tier version with basic functionality, but for the full version, you get a subscription that grants dedicated support and regular upgrades from the vendor.

Plus, by buying it, you get access to public cloud resources (OpenShift Online and OpenShift Dedicated) and a set of tools (Red Hat CloudForms) to manage the cloud infrastructure. However, there exists an open-source version of OpenShift called OKD: a container management and orchestration platform based on Docker and Kubernetes.

When it comes to OpenShift vs Kubernetes, the latter boasts greater compatibility with third-party systems and tools, which means it can be installed almost anywhere. On top of that, it has managed services for the three major cloud platforms (AKS for Azure, EKS for Amazon, and GKE for Google Cloud). Also, there is a plethora of tools to perform the installation of K8s, such as Kubeadm (the most popular by far), Kops, Kube-spray, Booktube, etc.

OpenShift loses in this aspect since it can be installed only on Linux and only on one of its three distributions. The open-source edition of OpenShift requires CentOs or Red Hat Enterprise Linux (RHEL), OpenShift 3 can use either the latter or Red Hat Atomic, and to install OpenShift 4, you must utilize RedHat CoreOS.

A similar difference between OpenShift and Kubernetes has to do with flexibility as well. Since K8s plays well with almost any operating system or legacy solution, it’s ultra-flexible in the ways of working with it. As for OpenShift, you can use it only with CentOS, FedoraOS, or, naturally, various Red Hat distributions.

In terms of scalability, OpenShift has a significant edge. Scaling with it is effortless and straightforward. Plus, you can leverage the available installers or Ansible playbooks to containerize virtual machines.

Kubernetes requires the addition of virtual machines to perform containerization, which is quite time-consuming since you have to create YAML scripts for it.

In this respect, Kubernetes vs OpenShift equals complexity vs user-friendliness. K8s can be managed via the default dashboard, but this is the only perk. First of all, it doesn’t have a login page, so you should build bearer tokens to accelerate authentication and authorization. Second of all, you need kube-proxy to connect the cluster server and your local machine’s port address. Third, the UI here is very basic, so cluster management at an advanced stage will require additional tools like Grafana, Prometheus, and Istio.

OpenShift’s console is the total opposite. It’s quite foolproof and enables robust cluster management even when their size grows over time. The dashboard has numerous options (build, update, scale, expose, deploy, and more), which take one click to implement. You may also integrate clusters with Istio or EFK stacks if you wish. Finally, the already mentioned installers and Ansible playbooks are a good tool for modifying, adding, and deleting resources during the development process.

Here, there is no OpenShift vs Kubernetes opposition really, because neither product offers an out-of-the-box CI/CD solution. To make up for this deficiency, OpenShift has a certified Jenkins container that acts as an integrated CI server. Coupled with Git, Nexus Repository, and SonarQube (for SAST), it’s used to build a typical OpenShift CI/CD pipeline.

To do the same in Kubernetes, you should commit additional tools like automated monitoring, testing, and CI servers. If you want your CI/CD pipeline to operate faster, you can involve CircleCI or other third-party plugins.

As for templates, Kubernetes vs OpenShift has a definite winner. The former offers the Helm set, where Helm itself is a package manager similar to Apt or Yum, and Charts are the packages. This tool enables package versioning and provides plenty of quite sophisticated and easy-to-use templates, thus augmenting the flexibility users get with K8s.

OpenShift’s templates are substandard, to put it mildly. As a rule, developers resort to external wrappers to make do and simplify the deployment.

Kubernetes doesn’t have such a registry, so you’ll have to configure a custom Docker registry or create pods by drawing images from a private registry.

Here, Kubernetes reigns supreme. All you have to do to enable multiple simultaneous upgrades is to invoke the kubeadm upgrade command, and voila: you get the latest version of it. Just remember to back up the current installation files before you upgrade to a newer edition.

It’s a totally different ballgame with OpenShift. Since it doesn’t support automatic concurrent updates, you have to reach out to the Red Hat Linux package management system each time you want to obtain the most recent version of OpenShift.

Since Kubernetes is an open-source solution, it can be deployed on any public cloud platform and any Linux distribution (Debian and Ubuntu included). Yet, this asset is mitigated by the complex manual procedure you have to go through to deploy it. Every step of the K8s application pipeline must be set up separately, so it takes an expert to do it properly.

In this aspect, OpenShift is everything Kubernetes is not. Of course, you need RHEL, Red Hat CoreOS, or CentOS Linux distributions for deployment, but once you have them, the framework will take care of all the deployment routines automatically. Just activate the DeploymentConfig command, sit back, and enjoy the result.

Something similar happens with security issues as the system is adapted to enterprise solutions. K8s doesn’t offer any built-in authentication and authorization capabilities, so you will have to handle token-bearing and other security protection procedures manually. On top of that, the lack of a well-defined security protocol explains the absence of encryption within a Kubernetes cluster. Of course, there are role-based access control features, but they are definitely inadequate to provide high-level protection against penetration attempts.

On the contrary, OpenShift is more secure. To begin with, it provides an integrated server that makes authentication and authorization a breeze. Then, it restricts users from utilizing many official images found on DockerHub and doesn’t permit running containers as root. Plus, you will need a minimum-security level to get access to administrator privileges on OpenShift.

Kubernetes vs OpenShift: The Verdict

As you see, in the OpenShift vs Kubernetes standoff, there is no definite winner. While some aspects are handled better by K8s, OpenShift has an edge in others. On balance, both tools are second-to-none options for large-scale deployment of containerized apps. Kubernetes is preferred by organizations that prioritize the flexibility of their products that require frequent updates. If you value out-of-the-box automation and constant, dedicated support, OpenShift is just what the doctor ordered.

In any case, the ultimate decision of which framework to opt for should be left to seasoned IT professionals. NIX United, with multiple successful projects under its belt, has sufficient expertise to choose the tech stack for a project of any complexity and employ it to deliver a top-notch app within the stipulated time and budget. Contact us to obtain an enterprise app that will dovetail your business goals and impress you with seamless performance and exquisite design.

Containerization is a surefire recipe for improving the development, performance, functioning, and deployment of apps. The two most popular frameworks leveraged for implementing containerization are Kubernetes and OpenShift, each of which has its own merits and demerits. While K8s is better in terms of accessibility, flexibility, deployment, compatibility, updates, and templates, OpenShift has an edge in scalability, management, security, and CI/CD. The ultimate choice of tool for a concrete project depends on many factors and should be entrusted to vetted professionals. 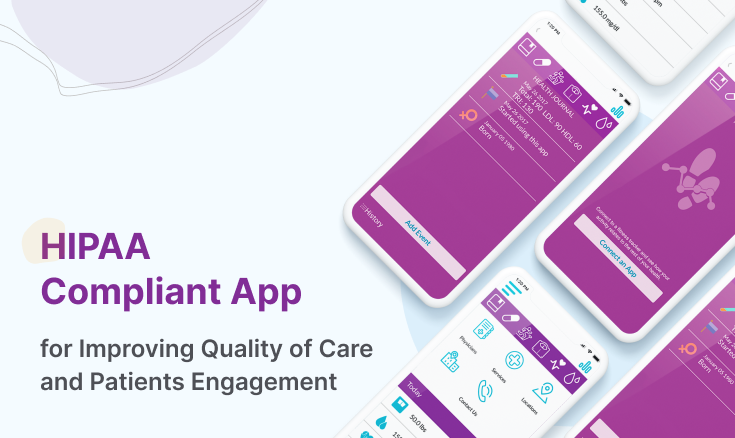 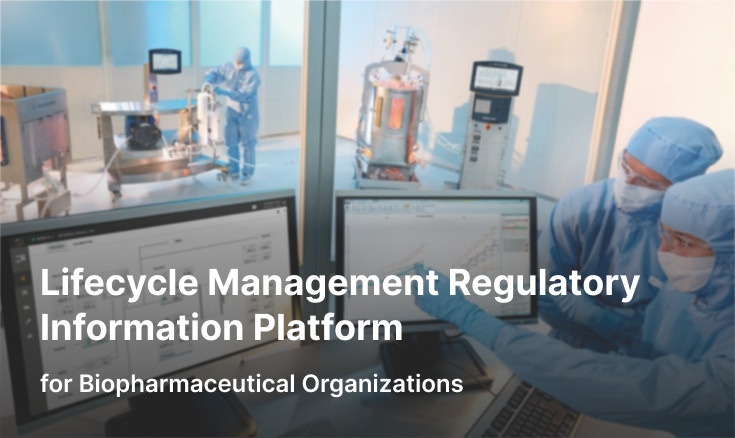 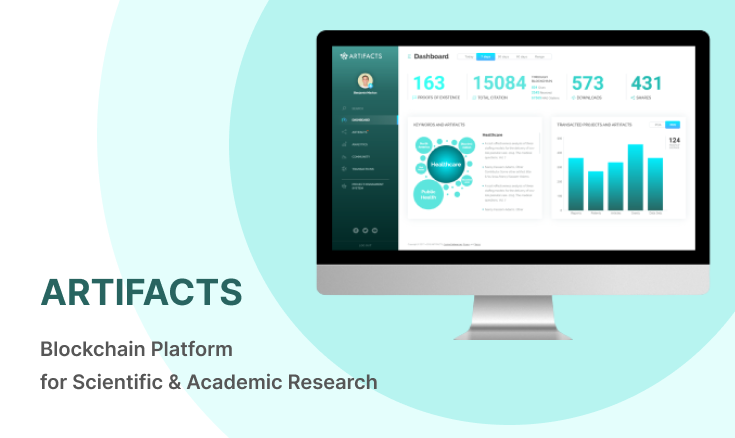 ARTiFACTS is a unique blockchain-based platform developed for scientific and academic research. 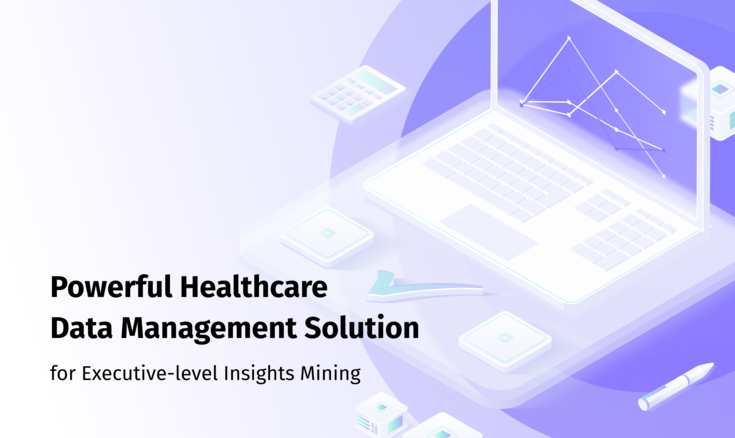 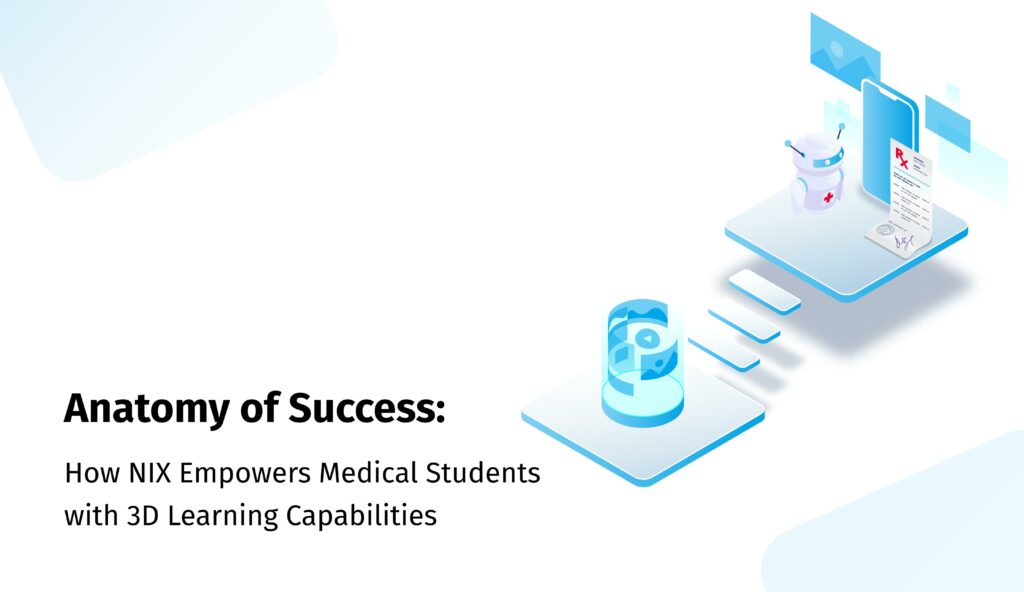 Web platform for building curricula with pre-built 3D lessons and slides from anatomy educators across the globe.

Development of advanced, Salesforce-based features to set up and automate processes related to the educational and management processes. 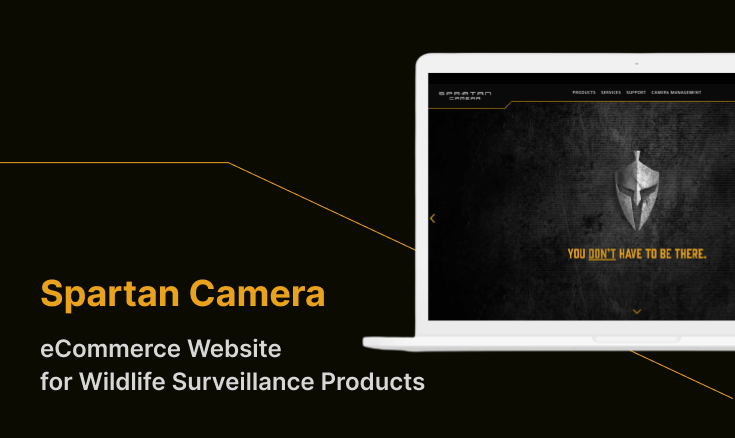 Spartan Camera it's an e-commerce website for outdoorsmen, private investigators, and business monitoring. 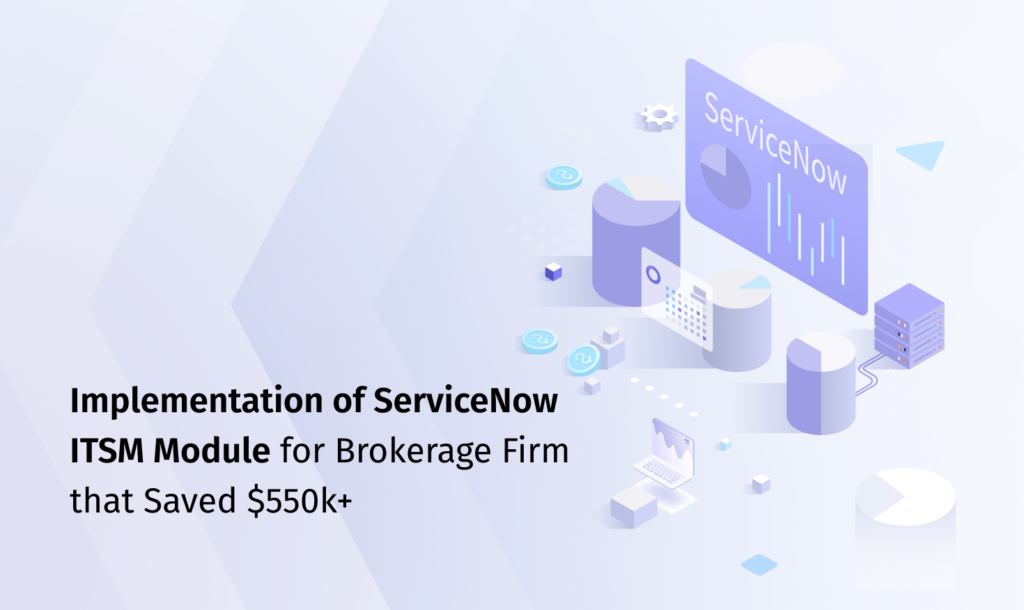 IT process optimization and automation resulted in increased IT performance, cost reduction, and personalized user support. 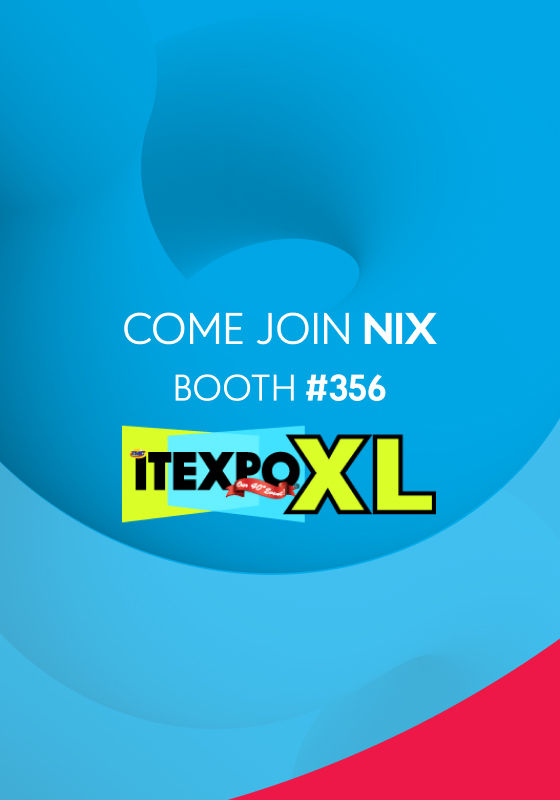 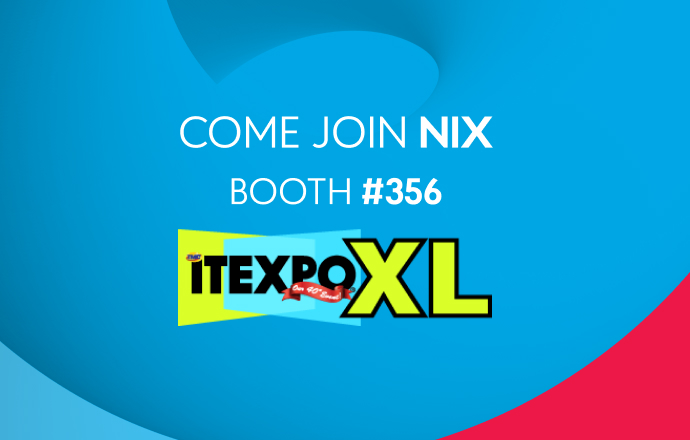