ARTiFACTS: How to Develop a Blockchain-based Research Collaboration Platform 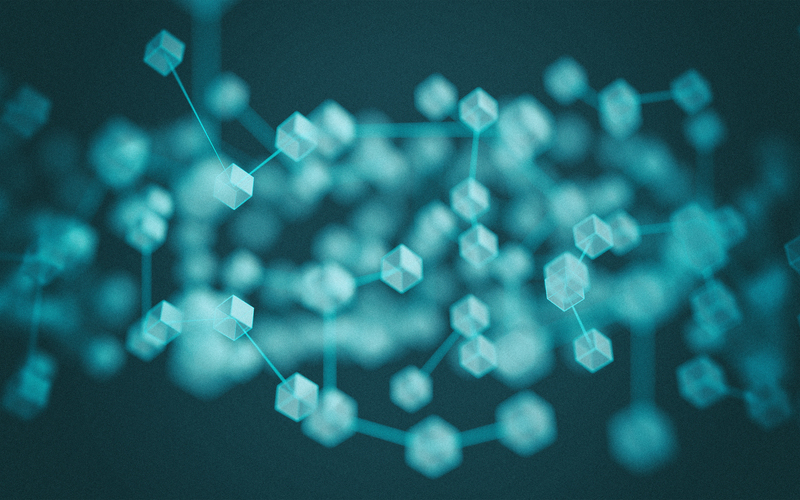 Here at NIX, we have several projects which deserve your special attention. ARTiFACTS is one of them. Working on this project, we had to deal with science, the protection of intellectual property, and the most advanced technologies. This is the story about how our team helped scientists around the world to conduct research and make scientific discoveries faster and more efficient. First things first. 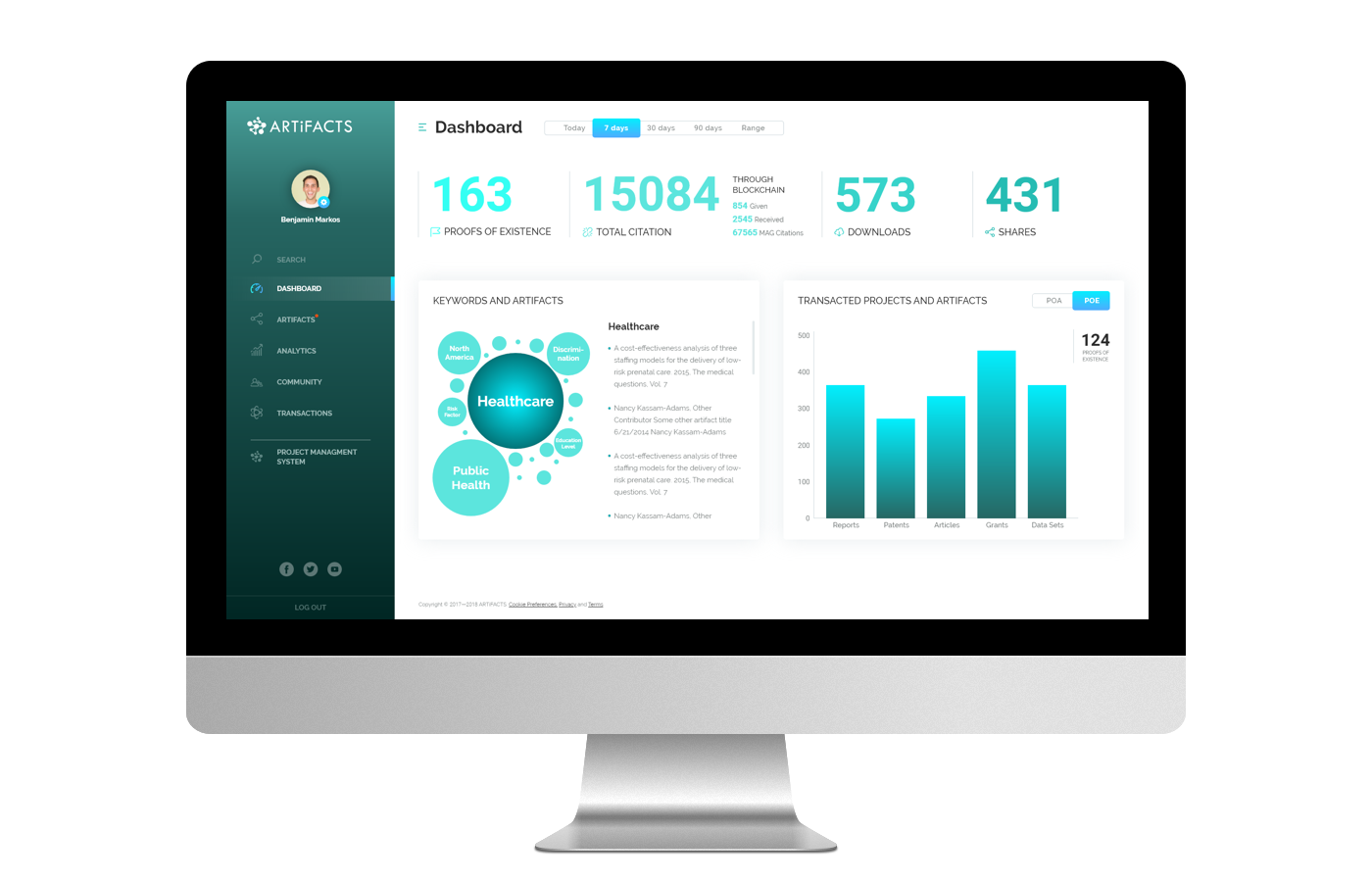 For a long time, a seemingly insoluble problem existed in the scientific community. On the one hand, it is crucial for scientists to discuss their ideas and have access to materials on the topic. This helps them to be aware of the current state of the research on similar topics from different teams, and not to make the same mistakes that some other teams have already encountered. On the other hand, there is nothing easier than appropriating someone else’s research and presenting the results as your own achievement. ARTiFACTS sought to solve this problem and contacted NIX for help in developing their product.

What is the Research Сollaboration Platform?

The idea behind a research collaboration platform is quite simple: to establish secure data sharing between scientists all over the world in order to prevent misappropriation of the research results. One of the most renowned blockchain-based platforms for researchers, ARTiFACTS, can guarantee the accomplishment of all these principles thanks to the storage and processing of all the materials on the blockchain.

In order to understand the main goal of the ARTiFACTS, you need to understand how research is published in the world of science. First, you work on an idea for a long time, fill out a lot of grant applications, then probably win some these grants, they finance your subsequent research, you assemble a team, conduct a bunch of research iterations, you have some documents that are useful for your team and potentially for other teams that work in this direction too. However, until the work on your research sees the world and someone refers to it, it can take up to 7 years, whereas science moves forward much faster. ARTiFACTS project helps science, let’s say, keep up with the times. It solves two main problems:

Halina, BA Lead for the ARTiFACTS Project at NIX 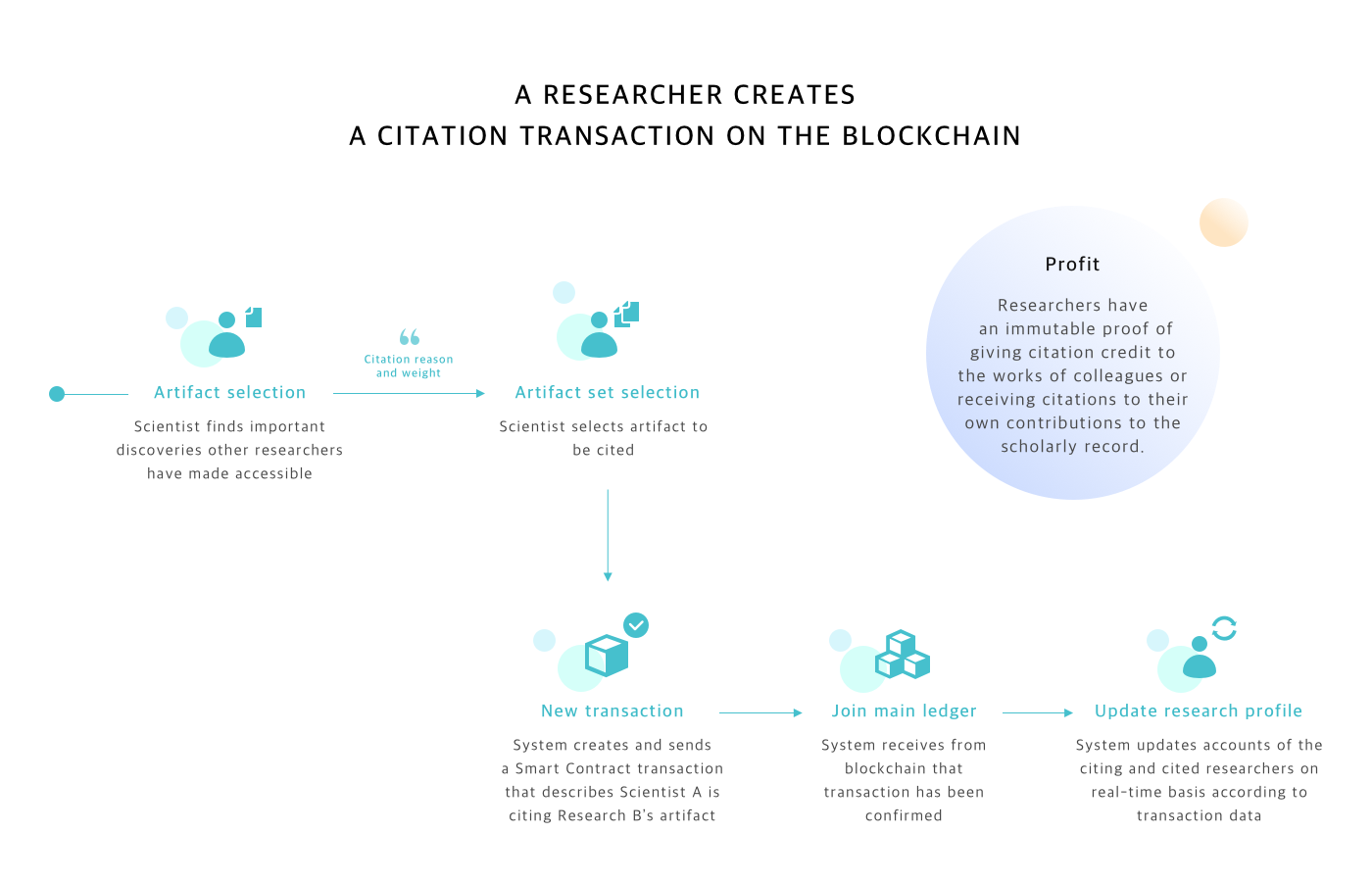 How it all started over?

NIX team had a task to develop the world’s first web-based platform for storing, sharing, and reliably protecting the research data. The main goal of the project was to provide scientists around the world with the opportunity to share their idea without fear of losing it.

Until recently, we had known only part of the goals that the customer has and focused on technical solutions that would help to achieve them effectively. However, during a business trip to the ARTiFACTS office, we conducted a detailed analysis, and now we understand that we as a team are involved in something unbelievable. Thanks to ARTiFACTS in the future, perhaps a cure for cancer will be invented! This is a completely different level of involvement.

Halina, BA Lead for the ARTiFACTS Project at NIX

When the client first contacted us, we had to learn more about the industry, pay attention to its peculiarities and working principles. Only then we could start the technical side of our work. 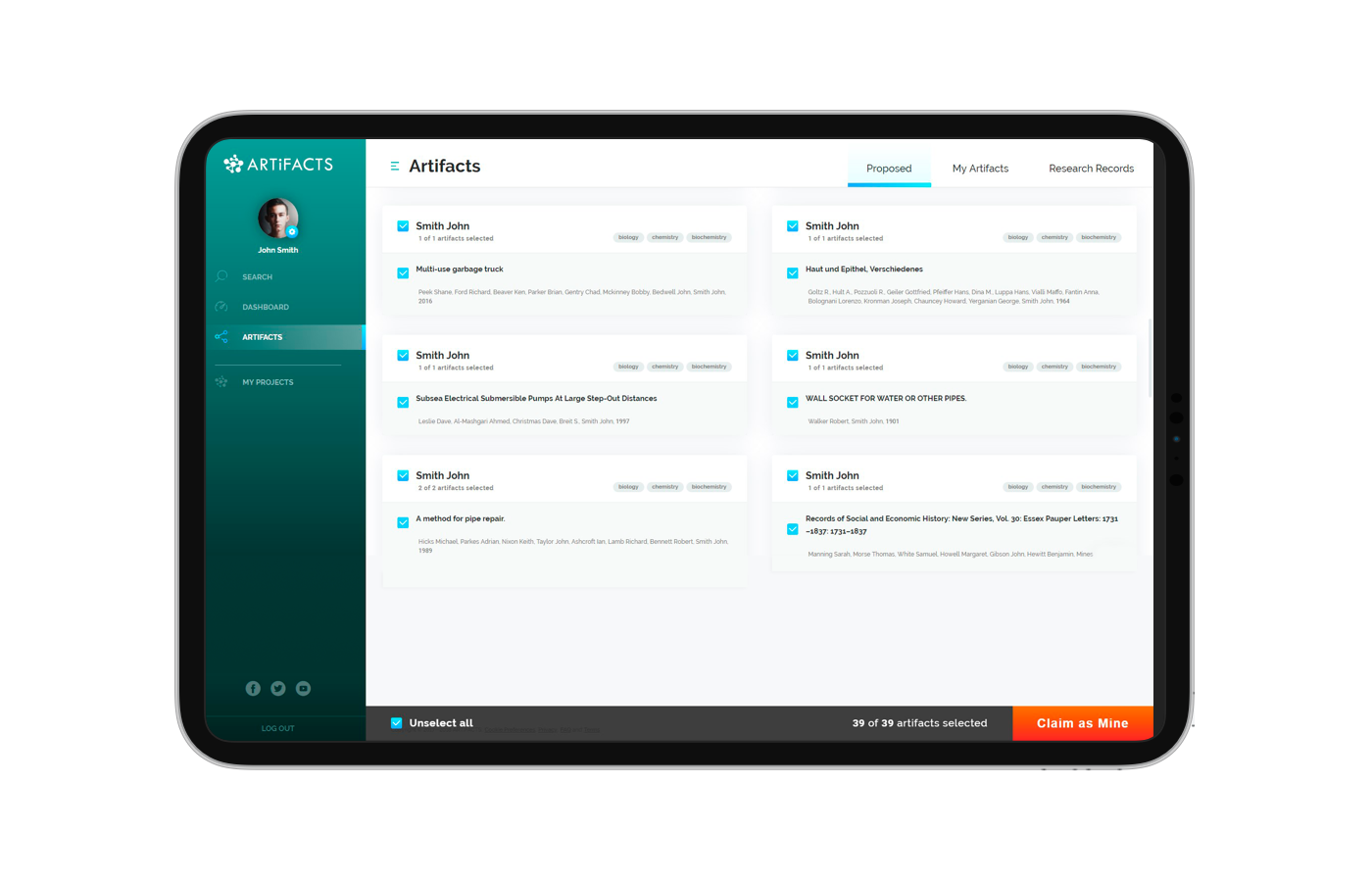 After a thorough analysis of the business domain, the NIX team proposed organizing the data structure in such a way that part of the data was stored inside the system and the other in the blockchain, and at the same time both parts were interconnected. To do so, the guys had to:

The ARTiFACTS project for me personally has been the most interesting project so far: using five databases, pulling patent data from different API, and at the same time saving all this metadata to the blockchain is really cool!

But the fun part is when you peer and analyze the data of these patents. I remember it was fun working with the documents of great scientists, and then you catch bugs because Albert Einstein or Sergey Brin crookedly filled in their data.

The first version of the product was created based on the Ropsten, Ethereum test network. The development team analyzed various options for creating a private blockchain and came to the conclusion that in this case, it would be more efficient to use Hyperledger Sawtooth. To this end, NIX experts have developed a strategy for transferring data from Ropsten to the new private Sawtooth network. And so that the client’s partners could continue to work successfully with the product, the team created a technical guide for them and a set of recommendations. 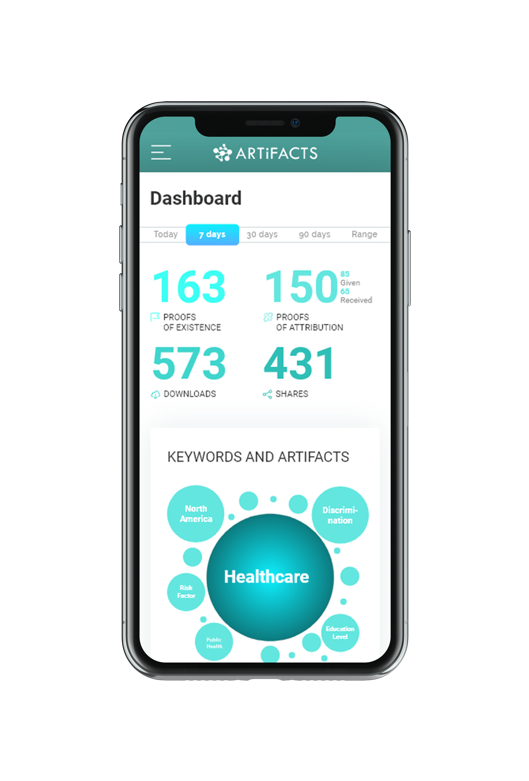 When you lack challenges in your life, they usually won’t be long in coming. So was the case with this project. It came suddenly, and almost everything was new for me: from the main development language to the mysterious and hype, at that time, blockchain.

Since then, my life has changed dramatically, and the project constantly gave us more and more new challenges. This includes the processing of large volumes of data, which introduced us to the graph database Neo4J; the development of entity identification rules; the deployment of micro (and not quite micro) service architecture on servers (hello, Rancher), and the writing of smart contracts for Ethereum, and the transition to private blockchain Hyperledger Sawtooth.

Many sleepless nights and efforts have already been invested in this project, and it seems to me that this is not in vain.

Alexey, Tech Lead for the ARTiFACTS Project at NIX

In less than a year of work on the project, the NIX team: 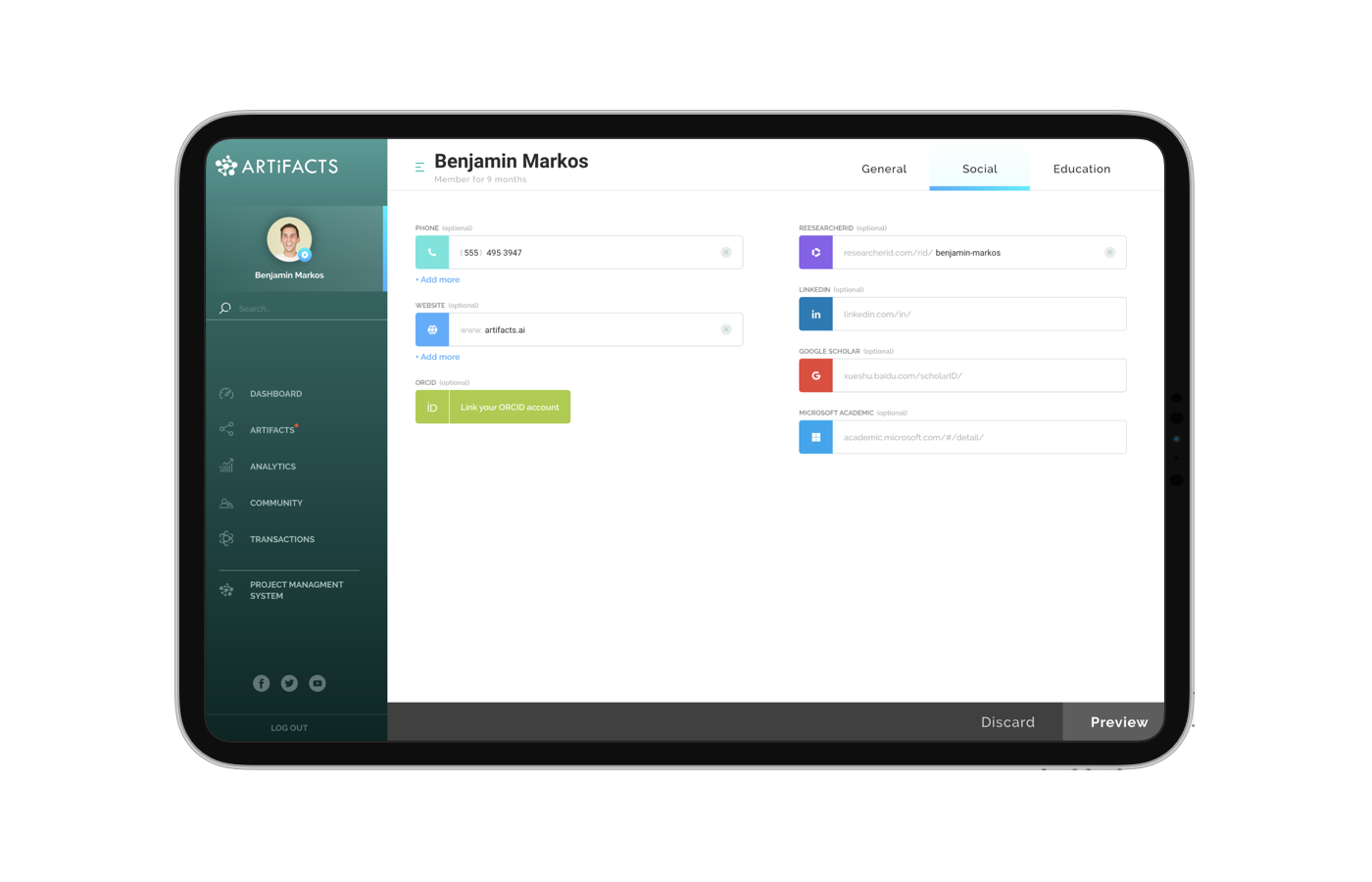 I joined the project during the second wave of development when most of the systems were fully operational. I remembered that stage very vividly. We were dealing with the coordination and development of new ideas, discussed a lot of details, and at the same time, I got acquainted with the system. I immediately realized that it would not be easy, but very interesting.

The domain area was completely new to me – scientists and their work, scientific publications, the protection of their data, and much more. The system itself is not quite trivial: it consists of many parts and connections that must be taken into account when implementing a particular functionality. I like that a large stack of technologies is used and various technical solutions are implemented – this allows the project and its participants to grow.

Elizabeth, QA Engineer for the ARTiFACTS Project at NIX

Thanks to the guys’ effort and expertise, scientists from all over the world can now collaborate in real-time, share ideas and gain recognition. In ARTiFACTS, researchers have the opportunity to consolidate the right on their materials by certifying them in the blockchain and increasing the level of trust in them.

Excellent technical skills and full involvement in the project made the NIX team indispensable specialists for the client and allowed her to become involved in creating a unique product designed to bring working conditions for scientists to a whole new level. We are still working with ARTiFACTS on a regular basis, and are very proud to have partners like this. NIX is also open for new projects, so if you have something in mind, reach out today!