Pros and Cons of Swift for iOS Development 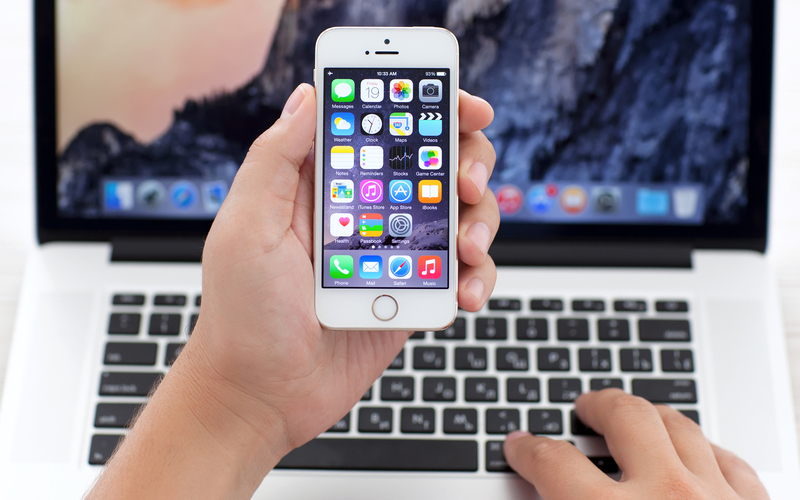 Android and iOS have been in competition in the mobile space for over a decade. Android has taken the lead in terms of overall market share, but iOS still leads with respect to a single vendor. In fact, iOS is on 22.1% of all mobile devices which means that choosing the right tech stack for iOS development matters. When it comes to making this choice, you could go the route of Objective-C, or you could look at another player, Swift.

Swift is a relatively new language and was only developed by Apple in 2014. Swift is simple and easy to use in comparison to other older languages. In addition, Swift is designed to work across the entire Apple ecosystem. This means you can use Swift to write programs for macOS, watchOS, tvOS, and even Linux apps. There are many advantages to the Swift programming language as shown in the image below.

Some key points to note are its:

While Swift is new, it is growing rapidly and is currently ranked 6th on the most loved, dreaded and wanted languages list.

Some Benefits of Swift for iOS Native Development

“Swift combines the performance and efficiency of compiled languages with the simplicity and interactivity of popular scripting languages.” – according to the official press release.

While Objective-C has been around for a while, the introduction of Swift in 2014 caused some consternation. Objective-C, for example, was popular and stable and had a very strong user base. It had been used for development since the 1980s. However, Swift provided a lot of benefits to developers, including a more modern way of working and coding.

Swift offers a way of coding in a simple manner. It does not force you to use complex syntax but has taken a page from other newer languages like Python and Ruby. This simplicity helps improve the overall speed of development.

Apple had a simple goal with Swift. Create a simple to use and understandable language. Swift uses industry standards to create clean code. Contrast this with Objective-C which is known for the complexity of the code and you can see why Swift has been growing in popularity. When comparing Swift to Objective-C, you can do the same, with less. Data shows that Swift is significantly more concise than Objective-C and offers developers a way of replacing close to 70% of the code to achieve the same results. From a coding and development point of view, this is a huge advantage. However, it also benefits testers and QA teams, putting Swift far in front.

Swift is young in comparison to Objective-C. This can be considered a positive or a negative depending on the point of view. However, one definite positive is that Swift has been designed to be future proof and can quickly be extended with new features. Also, as Swift was designed by Apple, ongoing support for the tool is much more likely.

Another factor to consider is the overall onboarding process. Swift makes it easy to add new developers to the team based on the simplicity of the codebase. This can be critical for companies as training is often a huge time sink.

Swift is fast. When considering overall speed and performance, Swift is up to 2.6X faster than Objective-C. With its short feedback loop, bugs and errors are easily identified and resolved. More importantly, its robust coding and typing system helps prevent code crashes. Another factor to consider is that this speed benefit will only improve over time as Swift becomes more robust.

By contrast, dynamic libraries that exist outside of the code are only uploaded when required. As standard Swift libraries are included in every macOS, iOS, tvOS, and watchOS this helps reduce the overall size of the application.

While Swift and Objective-C are different and either can be used independently, it is also possible to use them together. If this is of interest, there are two ways that this can occur in the same project.

The two are completely compatible and can be used interchangeably in the same project.

Swift offers a simple and easy way of controlling app memory. This feature helps to prevent memory leaks through automatic reference counting. By using Automatic Memory Counting (ARC) Swift determines what instances are no longer needed. ARC will automatically get rid of them for you, helping to improve app performance without impacting memory or the CPU.

Swift is not restricted to iOS alone. It can be used with other Apple products from the MacOS to Television (tvOS) and even smartwatches (watchOS). Besides, server-side Swift integrates with most backend technologies. In fact, by using Swift at the backend and frontend, apps can be created faster. This is primarily due to the reuse of code, but it is also a factor in developer time and overall resource availability.

With the backing of Apple and IBM, Swift has seen rapid growth. It has a very active and vibrant user community and is the second most starred language on GitHub. 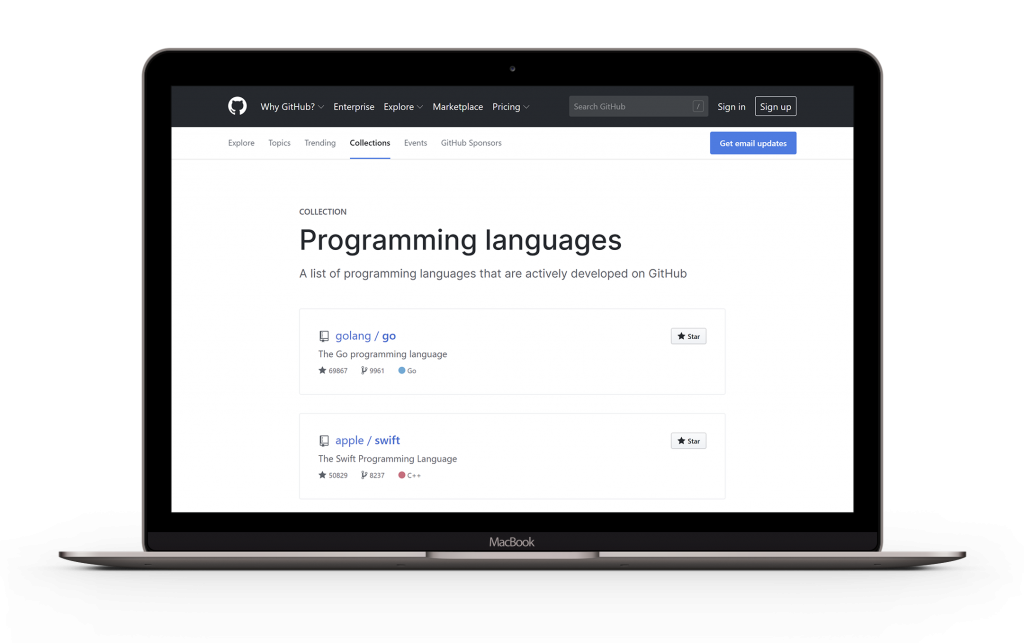 The Disadvantages of Swift

We’ve already talked about the benefits of Swift in depth. However, like everything in life, there are always two sides to any story. While there are many advantages of the Swift programming language, there are also some areas where it is lacking.

This could be considered a positive and a negative but Swift’s age sometimes negatively impacts it. Swift has only been around since 2014 while Objective-C has been in use since the 1980s. Fortunately, Apple has realized this and its most recent update goes a long way towards addressing the gap. The new update brings ABI stability across all of Apple’s platforms. In addition, it also includes backward compatibility of Swift versions along with improved documentation.

Currently, Swift is limited to native libraries and tools, unlike React Native or Flutter. With its engaged user community, there is potential for this to change, but right now, the focus is more on native development instead of cross-platform.

This is probably a function of its age more than anything else, but currently Swift has a very limited pool of talent. Based on a recent StackOverflow survey, only 6.6% of 87,354 respondents use Swift. In addition to the limited number of developers, even fewer have real-world experience with the language. This can make finding skilled resources difficult. Fortunately, the onboarding process does alleviate this somewhat.

Due to the regular and frequent updates, finding the right tools can be difficult with Swift at times. Though the official Apple IDE (XCode) lags in terms of tooling and support for Swift, it still provides smooth navigation and intuitive interface.

NIX is a world-renowned software developer. We have experience working with businesses of all sizes around the world. Our team of professionals is experienced with Swift and we can help you use it to its fullest. Whether your requirements include creating a new app from scratch, enhancing an existing product or anything else, call on our expertise to help your business grow.

Alienware Corporation is best known for its high-end gaming laptops and computer systems. As a leading computer hardware company that manufactures laptops, desktops & accessories for gaming and entertainment Alienware has a specific type of customer that they are targeting.

We worked with Alienware on their gaming portal. The Alienware team wanted to extend the user’s experience via mobile applications. This would allow players to access the gaming portal features on the go which would enhance the overall user experience.

Using Swift, the NIX team created a high-functioning app to dive into the gamer’s world. We found that this allowed the user to interact with the main features of the website. This included the Arena Rewards section as well as daily and weekly quests. Alienware determined that this added capability helped them attract more users to the gaming portal and increase engagement. 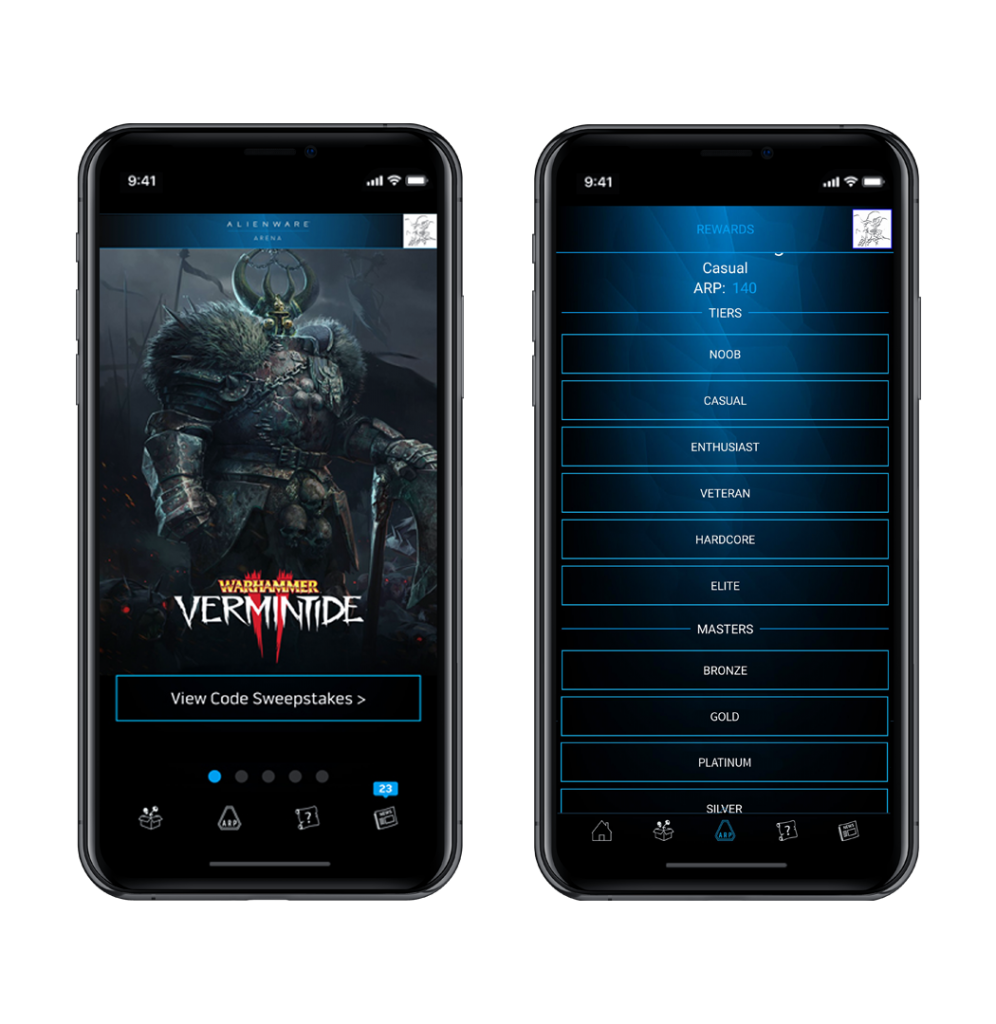 Vuze Camera has expertise in the photography field. They work extensively with 3D, computer vision and image processing. They have over 70 patents and are well known in the industry. We were lucky to get an opportunity to work with them closely on a new app. Vuze Camera offered the first consumer 360 3D camera with an associated dual-camera. This combination gave individuals significant power. Users could use the technology to create and share immersive experiences in 360° or VR180 (3D) Photo and Video.

The NIX team created an app that provided additional capabilities for Vuze Camera. The app allowed users to view videos in Cardboard or Little Planet mode. In addition, users could also make live-stream videos which could be shared through social media on Youtube or Facebook. Added to this was a powerful video editor which provided users with many fun features including:

It was a great adventure for us to develop such an innovative product and help the client to forge a path to success. 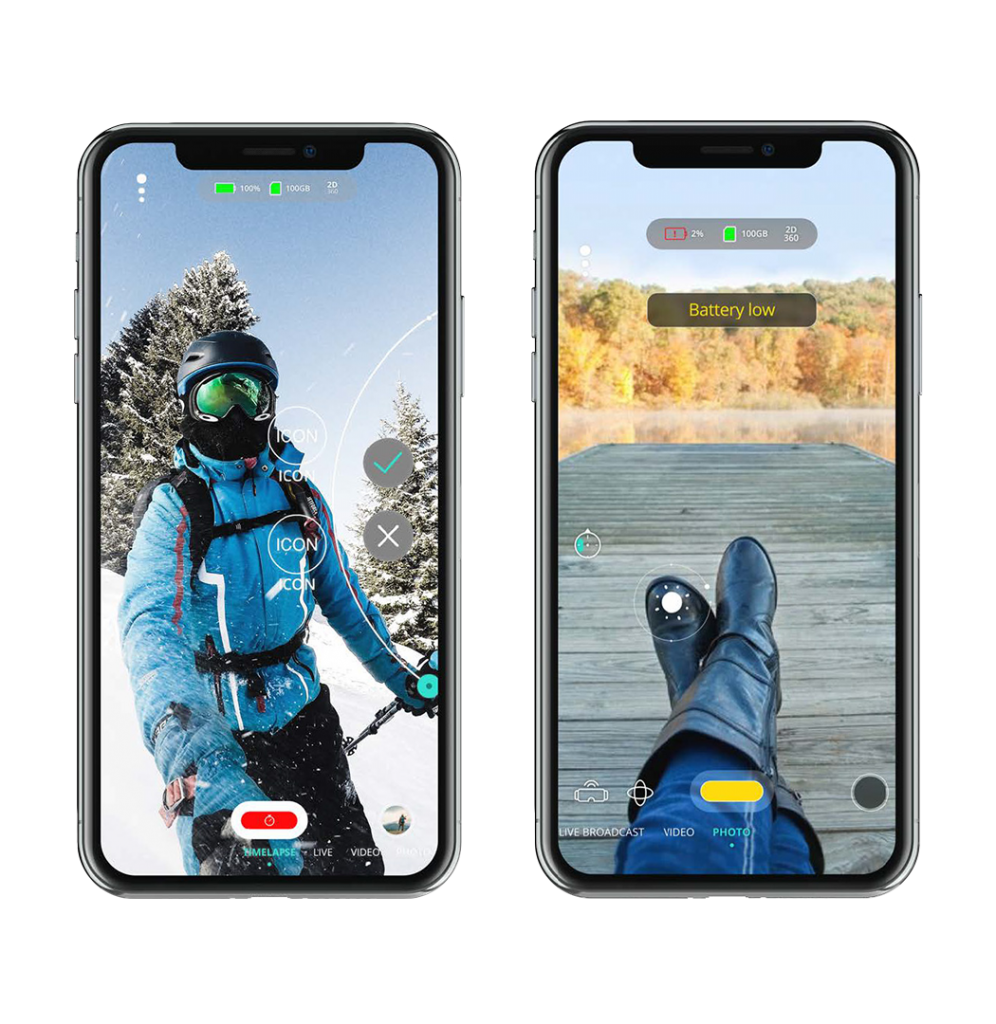 The client is one of the largest pharmaceutical companies in the world. The company offers education in addition to pharmaceutical drugs and we worked with them in one specific area. One of their programs offered educational leaflets to diabetics on a specific diet program. These leaflets were made available as part of patient care.

The NIX team developed an application that identifies surfaces to properly place our 3D objects based on lighting conditions. Using the app we were able to make the experience more interactive. We could automatically apply reflections of the real world onto AR objects, which empowered diabetic patients and doctors with healthy food recommendations. This helped to improve the health of patients and directly turned the dieting process into one that was more enjoyable and interactive. 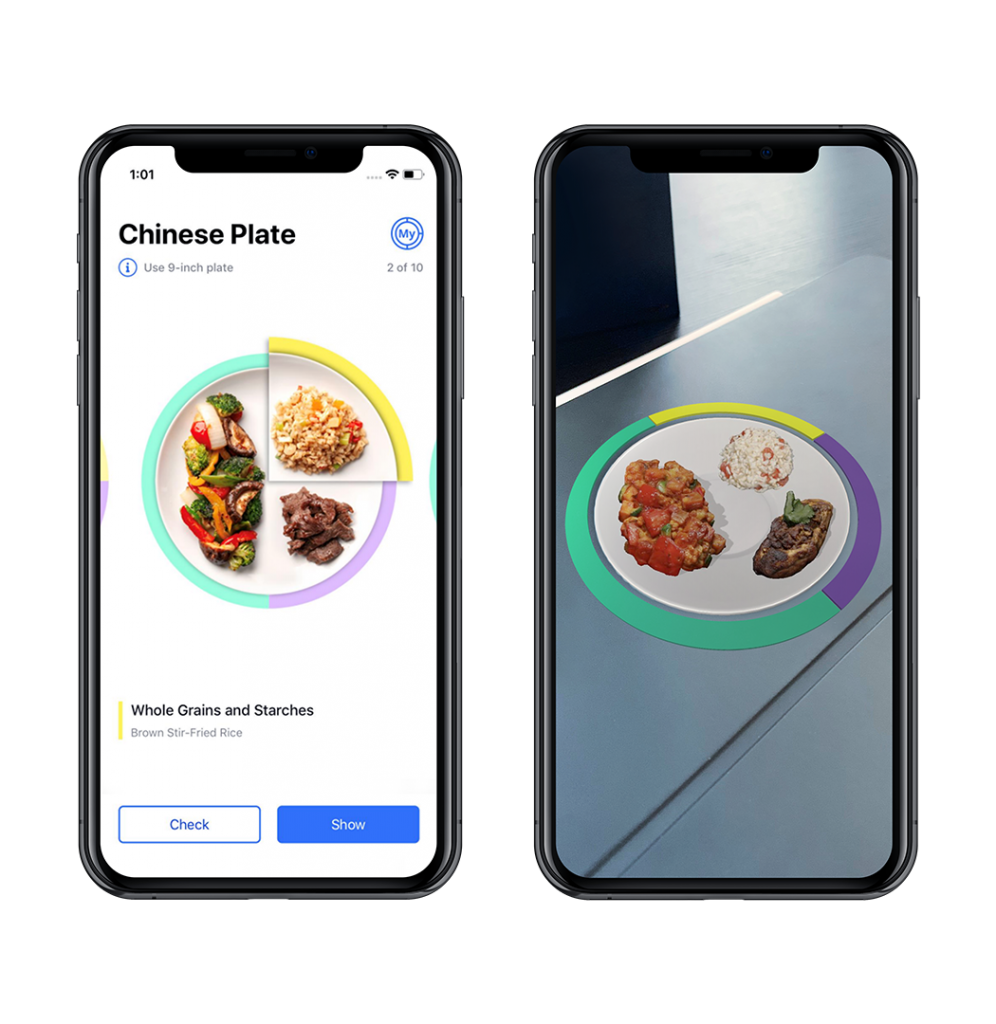 Many companies around the world use Swift regularly in their development. These include LinkedIn, Fitbit, Groupon and Pandora amongst others. Over time adoption of Swift will continue to increase. This will likely lead to the complete displacement of Objective-C as the primary language for iOS mobile application development.

At NIX we understand what companies and businesses need to reach that next level. Business owners cannot afford to fall behind their competition, they need to stay current with changing conditions. We can help navigate evolving technologies and help bring your ideas to life. Contact us to get a free estimate and let us help you grow.